BEWARE OF THE BERMUDA TRIANGLE… 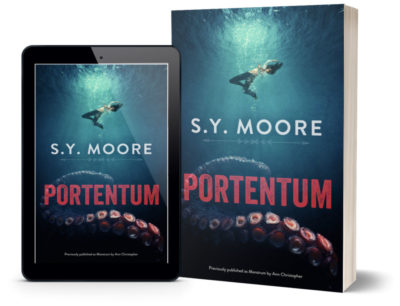 Few places on earth engender as much primal fear as the mysterious and forbidding Bermuda Triangle. With good reason.

A bizarre plane crash at sea leaves Bria Hunter and her high school classmates trapped in a chilling race for survival.

Will Bria and her friends escape from the evil presence before it’s too late?

In the mood for a nerve-shredding tale of horror on the high seas that keeps you turning pages with the lights on all night? Then grab Portentum today!

I wish they’d pipe down, because I’m wiped out— Hang on. I’m not the idiot in question, am I?

With that happy thought, I snort myself awake.

Opening my eyes, I groggily register the sunny cabin, the rows of seats and my aisle seat . . . and the faces my snickering friends.

The rest of my eleventh-grade class and I are on a small chartered jet, flying back to
Atlanta. Our private school requires us to Do Good Works, so we’ve been on a working spring break trip to the Bahamas, where we finished our SCUBA certification and helped marine biologists document the local wildlife.

Glaring at everyone, I sit up straight and rub the crick in my neck. That’s when I discover the stream of drool on my chin and give it a furtive swipe with the back of my hand.

“Wow,” says Gray, who’s in the end seat directly across the aisle. His brown eyes are sparkly with mischief and his dimples deepen as he looks me over. “You are hot, girl. H-O-T.”

“Screw you, Graydon,” I grumble.

Frown lines harden his angular face, making him look like a solid block of milk chocolate. “Did you just call me by my full name?” He lowers his copy of Sports Illustrated with an angry flourish. “Don’t make me cut you.”

“Leave me alone, Graydon.” Since we’ve all been together in the same classes and the same private school since seventh grade, I know when to take Gray seriously. This is not one of those times.

Gray nudges Carter on his right and points at me. “Note the hair.”

Oh, crap. My corkscrew black curls have thrived on the humidity all week. I don’t need a mirror to know that I probably look like a sheep waiting to be shorn. I try to pat it down.

“You look good, girl.” Carter leans across Gray so he can see me better with his bright blue gaze. Cupping his chin, he shoots me a smarmy up-and-down look of deepest appreciation, then gives me his signature move: a head toss that emphasizes his long blond rock star hair. “Can I get your digits?”

“Check back with me in a year or so.” I give up on trying to tame my hair and drop my arms in defeat. “You should have your first chest hair by then.”

“Seriously, though,” Gray says. “You should probably get your stylist on speed dial when we get back to Atlanta.”

“Okay, we were in the Bahamas for a working trip,” I remind him. “So forgive me if I was so busy studying the flora and fauna—”

“Someone’s been paying attention in Latin class for the last four years,” murmurs An, who’s sitting on my left. She’s been listening even though she’s got her nose stuck in her marked-up copy of Macbeth. She was born in China and adopted by an American family when she was a toddler. “Maggie? Origin?”

Maggie sits on An’s other side, in the window seat. “Flora,” she drones. “From the Roman goddess of flowers. Fauna—”

“Aw, geez,” I say, rolling my eyes and turning back to Gray. “You. If you want perfectly coiffed hair, you need to check out your pal Rico Suave there.”

Gray looks to Carter. “You do look good, man.”

“Will you soul-mate me?” Carter asks Gray mistily, turning back to his Guns & Ammo magazine.

I laugh. “While you two sit there completing each other, I’m going to read my fencing magazine.”

An frowns across at us. “You should all be finishing Macbeth.”

I’ve already finished Macbeth and am weirdly fascinated by his kick-ass wife, not that I’ll admit it to this crowd any more than I’d admit I like studying Latin and ancient Rome so much that I recently had a DVD-watching marathon that included Spartacus, Ben-Hur and, my favorite, Gladiator. “We’re on spring break.”

“You need to act like you want to get into a good college—” An starts.

Without warning, it gets a whole lot darker in here.

I blink stupidly, thinking, huh, that’s weird, but someone farther back in the plane screams
and there are several “Oh, my Gods!” That’s when I begin to get concerned. I look overhead.

The plane’s interior lights are still on.

I look out Maggie’s window.

The sky is dark.

No. The sky is black.

Craning my neck, I look out Carter’s window on the plane’s other side.

The sky is black.

Bewildered more than anything else, I try to make what’s happened fit into some set of
facts that makes sense. Did some automated shades come down ahead of the in-flight movie? Maggie, whose face mirrors my confusion, apparently has a similar idea and touches the window.

There’s no shade. The sky is black.

A wedge of anxiety opens up inside me but, in a move that would make my therapist proud, I take a deep breath and swallow it back. “What’s going on, guys? Is this normal weather over the Atlantic?”

Gray shakes his head, eyes wide. Balancing his elbows on his knees, he leans forward to address Sammy, who’s in the aisle seat directly in front of his. “What do you think, Sammy?”

The rest of us wait for his verdict. Also typical.

The rest of us exchange worried looks.

Behind us, the other kids and chaperones are working themselves up into a dull roar of
distress. Someone shouts for the flight attendant.

Sammy gives his shoulders a dismissive twitch. “I checked the forecast before we left. There’s a tropical storm brewing down south, but it wasn’t this close to us. This is bizarre.” We all turn and stare out our windows.

I see a black that’s absolute and impenetrable. A black that could’ve been made from coal mixed with tar and coated with the utter absence of light, something you’d expect to see inside a cave hidden three miles beneath the earth’s surface.

There’s no hint of shadow, sun, clouds or anything that signifies the earth I know. I could almost believe we’d hitched a ride on the space shuttle, except that if we were in space, I’m pretty sure we’d see a star or two.

I have the crazy thought that someone has picked up our plane, nailed it inside a coffin and buried it.